There are many examples of established artists who have incorporated taxidemy into their work – and of taxidermists whose mounts are considered works of art.

The Victorian era is generally considered the golden age of taxidermy, and many examples of taxidermy art were created during this epoch. After having seen the ornithologist John Hancock’s taxidermy display at the 1851 Great Exhibition in London, a judge remarked that this display “…will go far towards raising the art of taxidermy to a level with other arts which have hitherto held higher pretensions”.

Of course, back then, just as now, the eternal debate was alive: when is it art? Nearly half a century after the Great Exhibition, a critic reviewing Montague Browne’s Artistic and Scientific Taxidermy and Modelling in 1896 notes that “Any work which will aid in more clearly defining the difference between the art of taxidermy and the trade of taxidermy is to be welcomed.

This type of taxidermy art is a mixed media sculpture, and it doesn’t necessarily include any real taxidermied animal. Some examples of rouge taxidermy art objects are constructed entirely out of synthetic parts.

The genre is filled with a wide range of styles and subcategories, of which quite a few are non-figurative.

The term rouge taxidermy rose to mainstream knowledge in 2004 through the works of the Minneapolis-based artist collective “The Minnesota Association of Rogue Taxidermists”, a group founded by Sarina Brewer, Scott Bibus and Rober Marbury. Their works of art are generally described as pop-surrealist mixed media sculptures containing taxidermy-related materials. 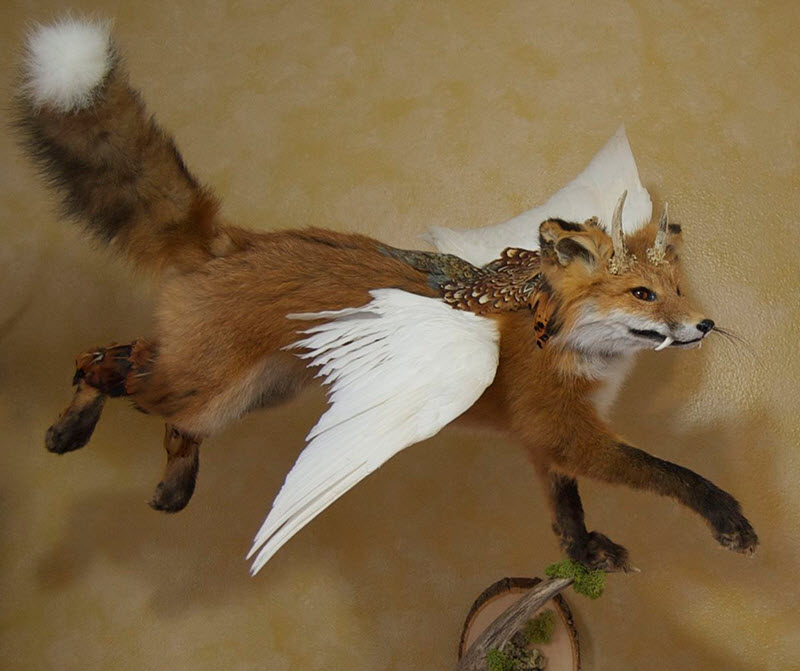 One example of a notable taxidermy artists is Carl Ethan Akeley, who lived in 1864-1926 and became famous for his action-pose techniques. Akeley Hall in the American Museum of Natural History (AMNH) in New York City is named after him.

In addition to being an artist, sculptor and a taxidermist, Akeley was also a biologist, conservationist, explorer, nature photographer, and inventor. He founded the AMNH Exhibitions Lab, an interdisciplinary department of the museum where scientific research is fused with immersive design.

Born in Claredon in New York State, Akeley grew up on a farm and attended school for no more than three years in his childhood. He learned taxidermy from a man named David Bruce in the village Brockport, also in New York state, and eventually managed to secure an apprenticeship in taxidermey at Ward’s Natural Science Establishment in Rochester, NY. Among other things, Akeley got a chance to work with the hide from elephant (Jumbo, of P.T. Barnum fame) that had been killed by a locomotive in Ontario.

In 1886, Akeley left Rochester to accept a taxidermist position at the Milwaukee Public Museum (MPM) in Wisconsin, where he would remain for a total of six years. At first, he worked chiefly with animals native to the prairies and forests of Wisconsin, and it was during this period that he created his famous diorama of a muskrat group. Eventually, he began workning quite a lot with non-native animals as well, and did for instance make a orangutan exhibit.

In 1892, Akeley left MPM and set up his own studio where he did contract work. One of his more famous creations from this era is the three mustangs he mounted for the Smithsonian Institution, and which were displayed at the World’s Columbian Exposition – a world fair held in Chicago in 1893 to celebrate the 400th anniversary of Columbus arrival to the Americas in 1492.

Three years after the fair, Akeley accepted a position with the Field Museum of Natural History in Chicago. During his years at this museum, he developed many of this groundbreaking approaches to taxidermy, including the use of mannequins that were sturdy depsite being hollow and lightweight. On these mannequins, the skin of the animals were mounted.

Back in New York

In 1909, Akeley began working at the American Museum of Natural History in New York City. His mounts of African animals are still on display there, in the Akeley Hall of African Mammals.

Akeley had a keen fascination for African wildlife, especially gorillas and elephants. As a taxidermist, he was renowned as one of the chief mounters of African mammals, and he fine-tuned the methods for removing the animal’s skin and fitting it over a carefully sculpted form. The result was astonishingly lifelike taxidermy mounts, which displayed anything from musculature to wrinkles and veins. He also became famous for his artistic skill when it came to displaying taxidermy mounts in groups in natural settings.

Akeley went on several expeditions to Africa to collect animals for his taxidermy art. In 1909, he participated in the Smithsonian-Roosevelt African Expedition to east and central Africa alongside Theodore Roosevelt who had just ended his second term as POTUS. The exhibition visisted British East Africa and Belgian Congo, before following the Nile to Khartoum. The group, which included both scientists and big game hunters, killed or trapped over 11,000 animals – but this number includes not just mammals but also insects. Roughly 1,000 large animals were killed, of which roughly half were big game animals. Among the dead were six rare white rhinos. Several tons of salted animals and skins were shipped back to the United States.

In 1921, Akeley led an expedition to Mount Mikeno in Belgian Congo. His aim was to learn more about gorillas and determine if killing them for museum dioramas was justified. At the time, few zoos had gorillas, so they were considered highly exotic outside their native range. His experiences during this expedition, where several gorillas were killed to provide him with museum specimens, had a huge impression on Akeley. While he still supported the idea of gorillas being killed for scientific and educational purposes, he opposed hunting them for sport or trophies, and he began campaigning for the establishment of a gorilla preserve in Virungas. In 1925, his campaign bore fruit as the King of Belgium established the Albert National Park in Virunga – one of the first protected wildlife areas in Africa.

In late 1926, Akeley embarked on his fifth and final expedition to Africa. He caught dysentery and died at Mount Mikeno, not far from where he had experienced his very first meeting with a gorilla several years ago.