Fish taxidermy is often carried out by specialized fish taxidermists, since working with fish is quite different from working with other types of animals. For instance, the skin of a fish is prone to losing most of the its colour as it dries out, and making a preserved fish look lifelike is therefore quite a challange. The traditional way of getting around this problem is to completely recreate the fish’s skin with paint – a very time-consuming task. 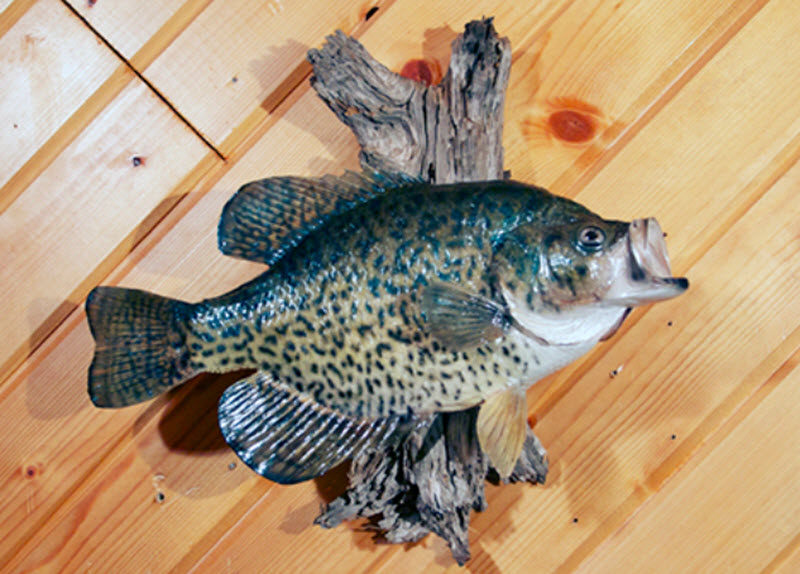 There are several different methods for mounting a fish, and which method that is best will largely depend on the type of fish. For instance, a bass fish is normally preserved by stuffing it with sawdust. For a smooth and greasy-skinned cold-water fish such as salmon or trout, using a foam mold instead of sawdust is he standard, since stuffing would show trough.

A common (but not the only) way of mounting a bass is to remove the skin using a sharp knife, such as a sharp fillet knife or a scalpel. You keep skin, head and tail – the eyes are discarded. The skin, and any remaining meat that can’t be removed from the head and tail, is injected with chemicals to preserve it, typically borax, alum and formaldehyde. Borax is then spread over the inside of the skin while the skin is still wet. If it’s done correctly, the fish will dry slowly, and this is important since quick drying can cause excessive shrinkage.

The skin is stuffed with a filler material, such as firmly packed sawdust and sewn shut. Alternatively, the skin can be stretched over a mold.

What to do with the fins?

The fins must be kept wet until you have sewn the fish shut. Then, they are spread out and pinned to a backer (typically cardboard) to keep them in the right position as they dry.

A fish can require several weeks of drying before it’s time to put the eyes in. Artificial eyes, such as glass eyes, are used instead of the real thing. You can purchase glass eyes intended for taxidermy; they will come with a pin attached to the back.

Once the eyes are in place, it’s time to do give the fish a few finnishing touches with paint and varnish, as needed.

Mounting a salmon or trout 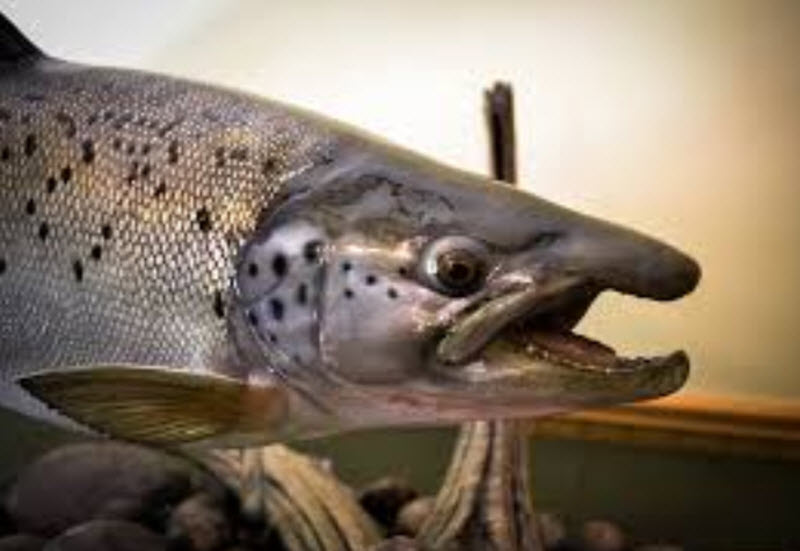 Salmon and trout are popular among sport fishers, and common fish types to be sent to a fish taxidermist for preservation. Both salmons and trouts have smooth and greasy skin, and they are difficult to stuff withouth ending up with the stuffing showing through. Because of this, they are commonly preserved using a foam mold instead. Some fish taxidermists preserve the head and tail, while other replace these body parts with artificial parts to decrease the risk of spoiling and problematic shrinking.

An alternative to fish taxidermy is to have an artificial replica made that looks like the original fish. This alternately is a very common choice for saltwater fishes, but it works well with freshwater and brackish species too.

Here is one example of how it can be done: A mold of the fish is created and then cast using a combination of polyester resin and fiberglass. The fish taxidermist paints each scale by hand to carefully replicate the appearance of the original fish.

To cut costs, a generic mold can be used instead of one that is created specifically for one individual fish specimen. If a generic mold is to be used, you don’t have to send your fish to the taxidermist – a couple of good-quality photographs depicting the fish from various angles will suffice. This is particularly useful for catch-and-release situations.